An ancient Roman coin thought to be a fake after being discovered in Transylvania more than 300 years ago is definitely genuine — and proves the existence of the ‘forgotten’ football leader, study claims

By Xantha Leatham, deputy science editor for the Daily Mail

A forgotten Roman emperor has been rescued from obscurity as a coin he thought was a fake was finally legalized.

The coin, discovered 300 years ago, depicts a leader called Al-Kafeel who was in power during the 260s BC.

It was thought to be a forgery, as it differs from both the manufacturing process and the general style of Roman coins from the time.

No other historical records have been found by the sponsor, but new analysis indicates that the coin is indeed authentic.

Who was the sponsor?

The panel suggests that Splayan was a commander of the army in the Roman province of Dacia during a period of military conflict during 260 BC.

Coins have always been an important symbol of power and authority in Rome.

The researchers believe that the sponsor may have allowed the creation of locally produced coins, some of which feature his own image.

Only four coins bearing the sponsor’s mark are known to have survived to this day.

The coin comes from a small hoard unearthed in Transylvania in 1713 that has found its way into collections across Europe.

Some of them ended up in The Hunterian Museum in Glasgow, where they remain hidden in wooden cabinets until now.

Researchers from University College London closely analyzed the coins – three of which depicted other known Roman emperors – using a combination of techniques, including light microscopy and ultraviolet imaging.

On the sponsor coin, they discovered subtle scraping patterns typically associated with coins that have been in circulation for a long period of time.

The researchers also analyzed ground deposits on the coin, and found evidence that after it was used the coin was buried for a long time before it was discovered.

The team said the new evidence strongly suggested that the coin was genuine.

They suggest that al-Kafeel was a commander of the army in the Roman province of Dacia during a period of military conflict during 260 BC. 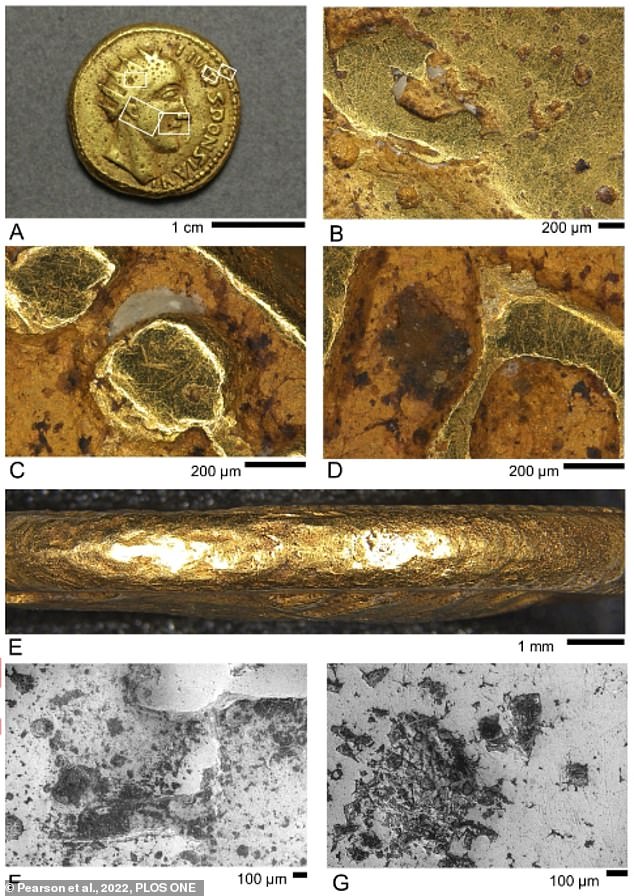 Researchers from University College London closely analyzed the coins – three of which depicted other known Roman emperors – using a range of techniques, including light microscopy and ultraviolet imaging.

Coins have always been an important symbol of power and authority in Rome.

The researchers suggest that the sponsor may have authorized the creation of locally produced coins, some of which feature his own image.

Only four coins bearing the sponsor’s mark are known to have survived to this day.

Our evidence suggests that he ruled Roman Dacia, an isolated gold-mining outpost, at a time when the empire was besieged by civil wars and the frontier lands were overrun by the plunder of invaders.

Curator of numismatics at The Hunterian, Jesper Ericsson, said: “Not only do we hope this will encourage further discussion of the sponsor as a historical figure, but also investigation into coins related to him held in other museums across Europe.”

The discovery has been published in the journal PLOS ONE.

How England spent nearly half a millennium under Roman rule

55 BC – Julius Caesar crosses the canal with about 10,000 soldiers. They landed at Pegwell Bay on the Isle of Thanet and were met by a force of the British. Caesar was forced to withdraw.

54 BC – Caesar crosses the Channel again in his second attempt to conquer Britain. He came with 27,000 infantry and cavalry and landed in Deal but were unopposed. They marched inland and after tough fights defeated the British and the main chieftains surrendered.

However, later that year, Caesar was forced to return to Gaul to deal with the problems there and the Romans left.

54 BC – 43 BC – Although there were no Romans in Britain during these years, their influence increased due to trade links.

AD 43 – A Roman force of 40,000 under Aulus Plautius lands in Kent and captures the southeast. Emperor Claudius appointed Plautius governor of Britain and returned to Rome.

47 AD – Londinium (London) is founded and Britain is declared part of the Roman Empire. Networks of roads have been built across the country.

AD 50 – The Romans reached the southwest and made their mark in the form of a wooden fort on a hill near the Exe River. A city was founded on the site of the forts decades later and named Isca.

When the Romans and Saxons allowed rule, all former Roman cities were called “Sisters”. This was called ‘Exe caster’ and the amalgamation of this eventually gave rise to Exeter.

75 – 77 AD – The Romans defeat the last of the resisting tribes, making all of Britain Roman. Many Britons began to adopt Roman customs and law.

AD 122 – Emperor Hadrian orders the construction of a wall between England and Scotland to keep out the Scottish tribes.

228 AD – The Romans are attacked by barbarian tribes and the soldiers stationed in the country begin to return to Rome.

410 CE – All Romans are summoned to Rome and Emperor Honorius tells the Britons that they no longer have a connection to Rome.

Source: History on the net