Business activity contracts in the eurozone for the fifth consecutive month

Business activity in the eurozone contracted for the fifth consecutive month but there were signs of improvement in confidence as supply chain constraints and price pressures eased, according to a survey of firms.

S&P Global’s eurozone composite purchasing managers’ index, an important measure of business conditions, rose 0.5 points to 47.8 in November, but still pointed to the second-largest drop in business activity in nine years excluding coronavirus shutdowns. A reading below 50 indicates contraction rather than growth.

The survey result was less bleak than expected by economists polled by Reuters, who expected a drop in the index to 47. Businesses reported easing supply constraints and cost pressures and a more optimistic outlook on the coming year. The rate of decline was significantly lower among manufacturers in Germany, the eurozone’s largest economy.

But the study also recorded a decline in factory production, falling new orders and slowing employment growth, in another sign that the eurozone’s economic output is expected to contract this winter.

“A recession thus appears likely, although the latest data provides hope that the magnitude of the downturn may not be as severe as previously feared,” said Chris Williamson, chief business economist at S&P Global Market Intelligence. He pointed out that the data indicated a decrease of 0.2 percent in the gross domestic product of the euro area in the fourth quarter, compared to the previous quarter.

He added that evidence of easing supply chain constraints and easing producer price pressures could “take some of the pressure off” the European Central Bank as policymakers weigh how far to raise interest rates to tame record inflation in the eurozone.

Most economists believe that the eurozone has already entered a technical recession, defined as two consecutive quarters of falling output. But they expect the decline to be less than initially expected after lower energy prices and easing concerns about gas shortages.

Manufacturers reported a sixth consecutive monthly decline in factory production, but said supply chain delays have eased and cost increases are slowing. Service firms said their monthly production fell for the fourth month in a row. Overall job growth was the weakest since March 2021.

“The rate of decline in new orders has slowed, while supply constraints have eased — suppliers’ delivery times have lengthened to the lowest since August 2020 — leading to a fifth decline in backlogs that was also the sharpest in two years,” said Melanie Debono, an economist at Pantheon. Macroeconomics. 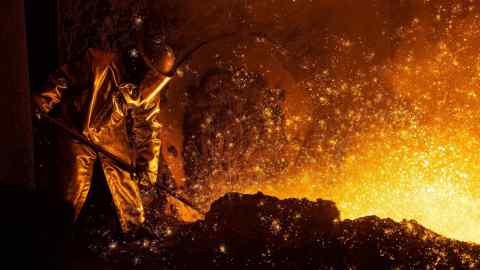 The business’s costs rose at the slowest rate for 14 months, allowing it to raise prices for its customers at a more moderate rate, “although inflation rates remained high,” according to S&P Global. German factories reported their first drop in supplier delays since July 2020.

“There is room to increase the availability of equipment in order to drive auto production in particular, which could mean that the manufacturing downturn in the fourth quarter is not as deep as we assumed,” said Jack Allen Reynolds, an economist at Capital Economics. .

Although companies in Germany reported the sharpest contraction in eurozone activity, the rate of decline slowed as the PMI score rose to a three-month high of 46.4. However, the contraction in French business activity deepened, with its PMI score falling more than expected to a 21-month low of 48.8.

Business activity also continued to soften in the UK, as the UK S&P Global/Cips Composite PMI was largely unchanged in November at 48.3, indicating a deepening recession that is expected to last more than a year.