Back in 2006, I disagreed with some analysts about the outlook for the inland California empire. I wrote:

As the housing bubble deflates, housing-related employment will decline; It falls dramatically in regions such as the Inland Empire. The more dependent an area is on housing, the greater the negative impact on the local economy.

So I think some pundits think it’s the other way around: instead of having a strong local economy keeping housing afloat, I think a bursting housing bubble will greatly affect local economies that are dependent on housing.

To be sure, the economies of housing-dependent regions like Inland Empire were devastated during the housing crisis.

This graph shows the unemployment rate in the Inland Empire (using MSA: Riverside, San Bernardino, Ontario), as well as the number of construction jobs as a percentage of total employment.

Employment in the construction sector has risen from its lowest levels (as a percentage of total employment), but is still well below the bubble years.

So, The Inland Empire’s economy is not as heavily dependent on construction as it was during the bubble – and it won’t be hit hard by the current housing slowdown. 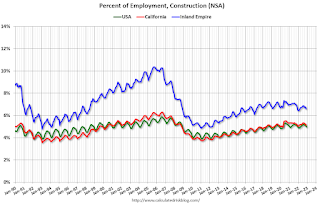 The second graph shows the number of construction jobs as a percentage of total employment for the Inland Empire, all of California, and the entire United States

It is clear that the Inland Empire relies more on building than most areas.