From the NAR: Existing home sales fell 0.4% in August

Existing home sales fell slightly in August, declining for the seventh consecutive month, according to the National Association of Realtors®. Sales varied on a monthly basis across the four major regions of the US with two regions posting increases, one unchanged and the other recording declines. On an annual basis, sales are down in all regions.

Total sales of existing homes, and completed transactions involving single-family homes, townhouses, condominiums, and co-ops, contracted slightly by 0.4% from July to a year earlier. Seasonally adjusted annual rate of 4.80 million in August. On an annual basis, sales faded 19.9% ​​(5.99 million in August 2021).
…
The total registered housing stock at the end of August was 1,280,000 unitsdown 1.5% from July and unchanged from the previous year. There is 3.2 months unsold inventory on display at the current sales pace – similar to July and up from 2.6 months in August 2021.
Confirmations added 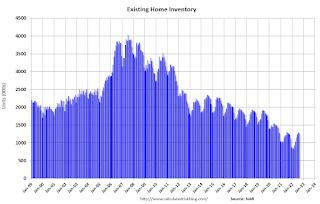 According to NAR, inventory fell to 1.28 million in August from 1.30 million in July.

The main stock is not seasonally adjusted, and the stock usually drops to seasonal lows in December and January, and peaks in mid- to late summer. 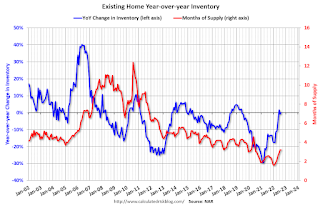 Inventory was unchanged YoY (in blue) in August compared to August 2021.

This was above consensus expectations. I’ll take more later.