Five economic reasons to be thankful

Here are five economic reasons to be grateful this Thanksgiving. (Hat Tip by Neil Irwin who started this years ago)

1) The unemployment rate is close to a 50-year low

This was up slightly from 3.5% in September – and this corresponds to the lowest unemployment rate since 1969! 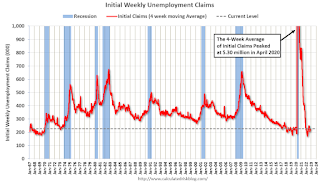 This chart shows a 4-week moving average for weekly claims since 1971.

The dashed line on the chart is the current 4-week average.

Although weekly claims have risen slightly recently, the 4-week average is near a 50-year low. 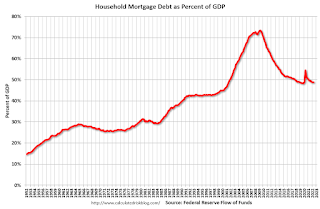 This graph shows household mortgage debt as a percentage of GDP.

Note that this graph was affected by the sharp decline in GDP for the second quarter of 2020. 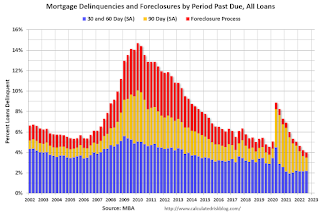 This graph, based on data from MBAs through the third quarter of 2022, shows the percentage of loans in arrears by days past due. Mortgage defaults were at their lowest level since the MBA survey began in 1979.

Note: The sharp increase in 2020 in the 90-day group was due to non-performing loans (included as delinquent, but not reported to the credit bureaus).

The percentage of loans in foreclosures increased year over year in the third quarter with the end of foreclosure freeze periods. 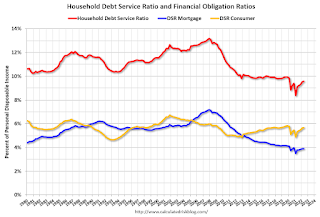 This graph shows, based on data from the Federal Reserve, the total debt service ratio (DSR), the DSR for mortgages (blue) and consumer debt (yellow).

This data indicates that the overall cash flow of households is in a strong position.