From the Federal Reserve: Industrial Production and Capacity Utilization

Industrial production fell by 0.1 percent in OctoberIts gains in September were revised down to 0.1 percent. Manufacturing output rose 0.1 percent in October, and the increases in July, August and September were smaller than previously reported. In October, the mining index fell 0.4 percent, and the utilities index fell 1.5 percent. At 104.7 percent from its 2017 average, total industrial production in October was 3.3 percent higher than the reading a year earlier. Capacity utilization fell 0.2 percentage point in October to 79.9 percent0.3 percentage points above the long-term average (1972-2021).
Affirmations added

Note: The y-axis does not start from zero to better show change. 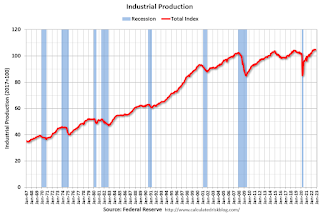 Industrial production in October fell to 104.7. This is higher than the pre-pandemic level.

The change in industrial production was lower than consensus expectations.