Inflation appears to be diminishing. Traditional change from a year ago:

Month-to-month changes are now suddenly more common on the way down than they were on the way:

I don’t generally make predictions – unconditional forecasting is a risky game in economics. But I’ve been as far from a limb this year as I ever thought it was possible and even probable. 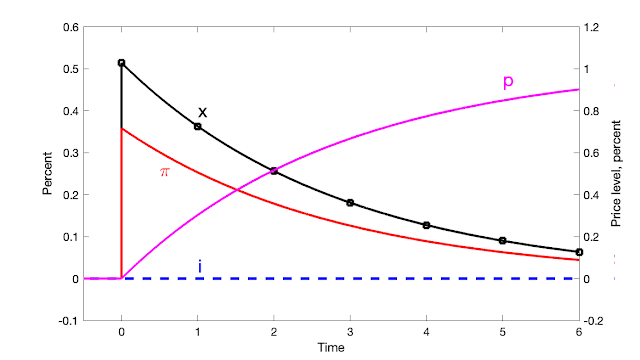 So while inflation was still on the rise, starting here, last March, here at length for the Hoover monetary policy conference published under the title “Inflation Past, Present, and Future,” and further shortened here with the first draft of “Financial History,” Here clearly from continuous time models, here in the Wall Street Journal and here in pictures, here in the first draft of “Outlook and Interest Rate Neutrality,” I came out in a position with the view that inflation will subside, even without the Fed dramatically raising interest rates. Then, it was updated here as did inflation after it started to ease off. (Okay, looks like I’m making the same point multiple times!)

I call this the “Second Great Experiment,” as the traditional theory goes, the Fed needs to raise interest rates significantly above current inflation to bring down inflation.

Now, to Luther’s point of view. Isn’t this a victory round for the view that inflation is just “supply shocks” that disappear on their own?

No, a “supply shock” would raise prices temporarily, and then the prices It will return to normal once the shock of the show is over. A supply shock alone cannot permanently raise the price level. How does the price level work?

Well, that hasn’t happened yet. The current end to inflation does not prove the “supply shock” view correct. Maybe you will. If we get a period of 10% deflation, unrelated to Fed action such as inflation, the supply shock outlook could take a “we told you so” turn. Although, of course, nothing in economics is that simple.

what happened after that? In the simple financial theory model, the Fed could lower inflation today, but only by making future inflation a little worse. This is also desirable. For a recent round table on economic policy at Hoover, I made the following chart: 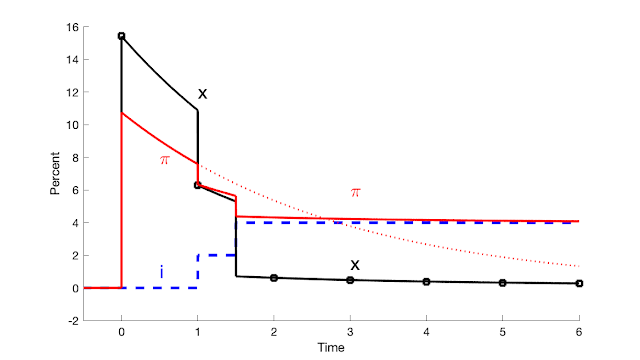 The beginning is the same as the last chart – responding to a 1% financial shock when the Fed does nothing. Now I ask, what if the Fed waited a year and then started raising interest rates. You see in the short term that the Fed is cutting inflation faster than it could go down. However, we will have to inflate the debt at some point unless fiscal policy wakes up and decides to pay it off more aggressively. So we get more inflation in the long run. I call that “unpleasant interest rate calculation.”

This leads me to worry about the future of 1975:

Inflation comes down without much Fed intervention, and we all cheer, but then it stalls at maybe around 4%. And we await the next shock, amid the dreaded arguments of the 1970s that we must get used to inflation, raise the inflation target, and it’s too expensive to lower it, or is it really all about workers-managers conflict in prices anyway.

I’m more wary of this. The graph of the effects of monetary policy has unstable components in it. However, you should use the form you have, not the form you wish you had.

On a note of optimism, long-term expected inflation and the price level remain in Fed control, even in my fiscal theory model. After the financial explosion has been blown away, the Federal Reserve can gently normalize the situation. The step of the ladder is not realistic, of course, but it is designed to show the mechanism. 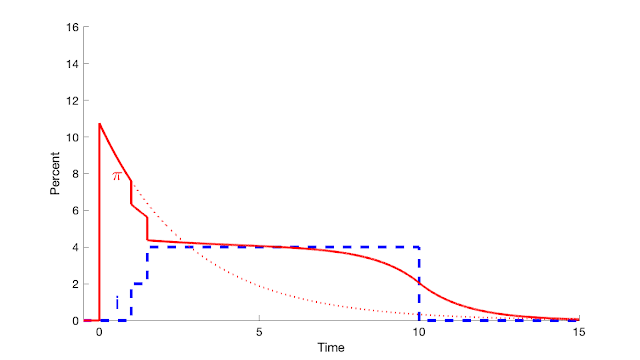 But some new fiscal or monetary shock is sure to kick in before we see that. This is one of the main risks of economic forecasting, what I called “unconditional” above. All we can do is say what is expected to happen, and what will happen on average in many situations like ours. But what actually happens depends mainly on which shocks hit us next. So as rhetorically appealing as it is to point fingers at the proper field stands and announce where the main race is going, that’s not how it works. Even if the prediction is the best it can be, on average, it will be wrong about half the time. So beware of evaluating any economic model, including mine, on single data points, and the rhetorical magic of a priori predictions. On the other hand, they add weight to the evidence.