Initial dwellings fell to an annual rate of 1.382 million in December

From the Census Bureau: Permits, Starts, and Completions

The first chart shows the beginnings of single and multi-family housing over the past several years.

Single-family starts (in red) were up in December and down 25.0% year over year. 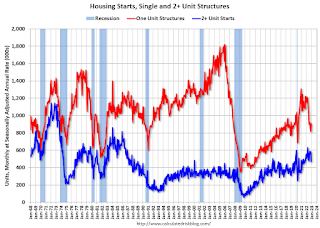 The second graph shows single and multi-family housing started since 1968.

This illustrates the massive collapse that followed the housing bubble, then the eventual recovery – and the final collapse in the single-family begins.

Total housing built in December was higher than forecast, however, the beginnings of October and November were revised downward, combined.