From the MBA: Mortgage applications drop in the latest weekly MBA survey

Mortgage applications are down 1.2 percent from the previous week, according to the Mortgage Bankers Association (MBA) weekly mortgage application survey data for the week ending September 9, 2022. This week’s results include an adjustment to celebrate Labor Day.

“The 30-year fixed-rate mortgage rate hit six percent for the first time since 2008 — rising to 6.01 percent — which is double what it was a year ago,” said Joel Kahn, associate vice president of economic and industry forecasting at the MBA. . “High mortgage rates have lowered refinancing activity by more than 80 percent from a year ago and contributed to more home buyers staying on the sidelines. Government loans, which tend to be favored by first-time buyers, bucked this trend and increased during the week, largely driven Fundamental to the lending activity of the US Department of State and the US Department of Agriculture.”

Kahn added, “The spread between 30-year fixed-rate mortgages, ARM loans and jumbo loans remained wide last week at 118 and 45 basis points, respectively. The wide spread underlines the volatility in the capital markets due to the uncertainty about the Fed’s next policy moves.”

…
The average contract interest rate for 30-year fixed-rate mortgages with matching loan balances ($647,200 or less) increased to 6.01 percent from 5.94 percent, with points dropping to 0.76 from 0.79 (including creation fees) for 80 percent loan to loan value ratio (LTV).
Confirmations added

The first chart shows the refinancing index since 1990.

With mortgage rates rising, the refinancing index has fallen sharply this year.

The refinancing index is at its lowest level since 2000. 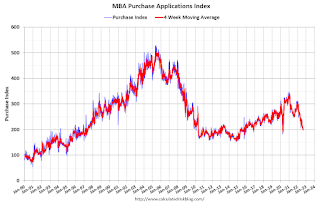 According to the MBA, purchasing activity is down 29% year over year, unadjusted.
The buy index is now only 8% above the pandemic low.