The number of housing starts fell to 1.425 million, an annual rate, in October

From the Census Bureau: Permits, Starts, and Completions

Building permits:
Privately owned housing units licensed under building permits in October had a seasonally adjusted annual rate of 1,526,000. This is 2.4 percent below the revised September rate of 1,564,000 and 10.1 percent below the October 2021 rate of 1,698,000. The single-family permit rate in October was 839,000; That’s 3.6 percent lower than September’s revised number of 870,000. Unit permits in buildings consisting of five units or more amounted to 633,000 units in October.
Affirmations added

The first chart shows the beginnings of single and multi-family housing over the past several years.

Single-family starts (in red) declined in October and were down 20.8% year-over-year. 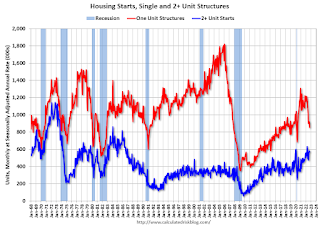 The second graph shows single and multi-family housing started since 1968.

This is indicative of the massive collapse that followed the housing bubble, and then the eventual recovery.

Total housing built in October was above forecasts, however, starts in August and September were revised down slightly, combined.