This is the third article in a series of blog posts that examines Diego Escobari and Gary Hoover covering the 2019 presidential election in Bolivia. Their conclusions do not hold up to scrutiny, as we note in our Nickels Before Dimes report. Here, we expand on the different claims and conclusions made by Escobari and Hoover in their paper. The first two posts can be found here and here.

In our previous entry, we noted that even a slight bias in the order of vote counting can mislead our understanding of elections. Specifically, the tendency for one candidate’s votes to be considered in advance of another candidate’s votes means that a partial count will not be representative of all voters. Under very simple assumptions, what appears to be a stable general trend may swing very sharply. Expectations of end results must not be naive and fail to take into account Nickels before dimesLest the analyst be surprised by the final result.

In our example of biased counting, any vote for Candidate B was 14 percent more likely to be counted when compared to any vote for Candidate A. As a result, votes for “A” were 16 percent more likely to be counted among the last-sixth vote than they were among the first-sixth. This was enough to eliminate naive estimates of the election outcome based on partial reports.

Of course, not all rural voters voted for Morales, nor did urban voters oppose him. However, early biases against rural voters are factors that must be fully factored into the partial count of results. There were good reasons for these biases to exist.

In the initial census, polling stations were included in roughly the same order in which results were transmitted to a central location via the mobile app. This meant that rural areas without cellular coverage were delayed as staff responsible for submitting results waited to be transported to sites with cellular coverage. Moreover, poll workers were chosen at random, and not all poll workers were well trained. Those drawn from poor, indigenous communities had high levels of Spanish literacy and were unlikely to have the type of clerical experience that would facilitate the work of polling station administration. According to the Election Observation Mission (EOM) of the Organization of American States:

69% of the tables observed had all of their formal members, while 15% had to turn to voters who were in line. This last percentage is significant given that the citizens who went to serve at the tables had little or no knowledge about their turn.

In addition, the Election Observation Mission noted that in most cases the level of training of poll workers was insufficient, forcing them to constantly turn to the election notary in order to carry out their duties. This became most acute at the time of closing the polls, while the votes were being counted, and when the count sheets were being filled out.

The EOM did not indicate whether such problems are more prevalent in neighborhoods of a particular socioeconomic status, but even a slight delay in reporting can easily bias the counting order. At peak transmission, a delay of just five minutes would allow another 1,700 polling stations — nearly 5 percent of the total — to report first.

Preliminary count results were based on electronic submissions. However, the polling station cannot be included in the official count until the results have been manually delivered to the offices in the provincial capitals. This created a strong and natural bias for counties geographically close to the offices to be counted early. It only takes a little imagination to see that precincts only a few blocks away will produce results very early, while precincts in remote and almost inaccessible cities will yield results much later. The electors were in the capitals 11 times Their polling stations are more likely to be included in the first sixth of the count than in the last sixth. The capitals in particular were fiercely opposed to Morales.

There is another bias worth noting. Escobari and Hoover show, in the right panel of Figure 3, that rural polling stations were disproportionately likely to report results too early and too late.

They speculate that the high rural share among the early reporters came from polling stations with relatively few votes to be counted. Yet they dismiss the “rural voting effect” as an artifact of decades past.

The “rural vote effect” (later rural station reports) is just as true, if partially obscured by the small station effect that was disproportionately applied to rural precincts. Only 11 percent of eligible voters are assigned to polling stations with fewer than 215 voters. Because there are fewer eligible voters, and therefore fewer votes to be counted (an average of 120 voters, compared to 201 for the larger stations) small polling stations tend to submit their versions of the results first. Compared to the urban electorate, it was the rural electorate six times It is likely to be assigned to one of these small polling stations, and so the early results were disproportionately rural. However, regardless of whether the station is small or large, rural stations tend to send results later than urban stations.

blue line from Figure 2 It pretty much replicates Escobari and Hoover. Our numbers are a little higher because we limit our analysis to polling stations located in Bolivia (Bolivians may vote worldwide in Bolivian elections), but the story is the same: Older and newer reporters were disproportionately rural. However, by dividing the stations into small and large groups, we see that rural stations tend to report late, regardless of their size. 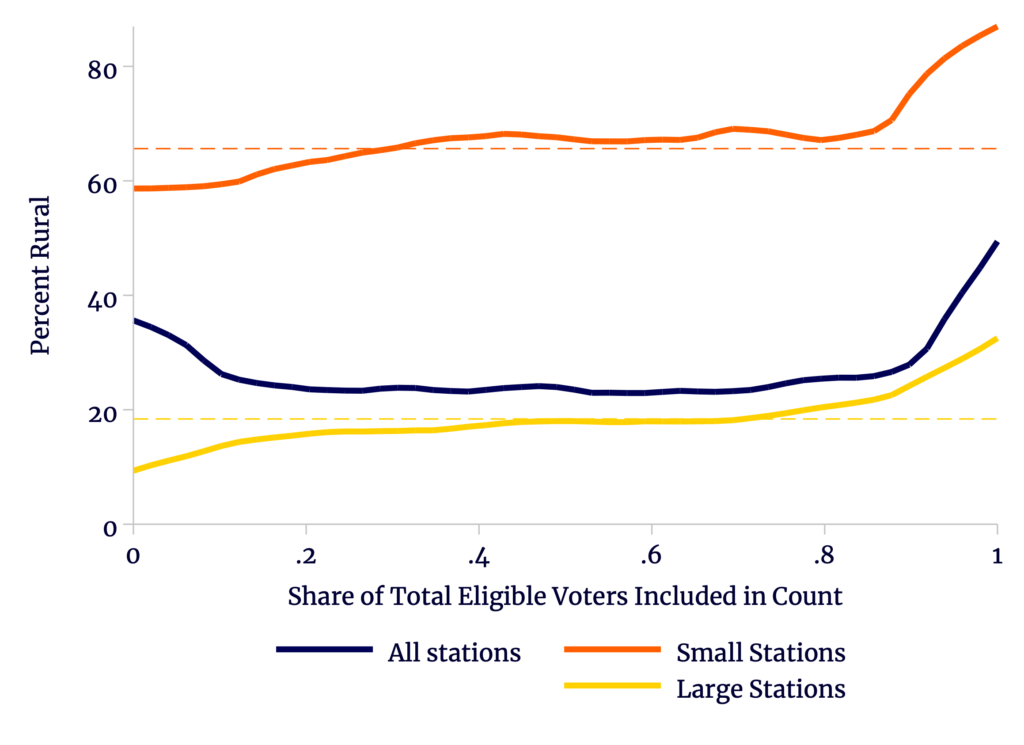 This is an incomplete accounting of the biases involved in the partial count of the 2019 election. For now, it is enough to recognize that votes were not counted at random and that the problem of counting nickels before dimes is a real problem and must be accounted for when the count is incomplete.

In the following post, we provide some background on the preliminary census and note how the nickel-before-dimes problem created a misleading picture of the election—with disastrous consequences.