President Xi Jinping said on Wednesday that he was particularly worried about the spread of the COVID-19 wave in China to rural areas with poor medical facilities, but urged perseverance in difficult times, saying that “the light is ahead.”
His comments came as millions of urban workers were traveling to their home cities and meeting families for the Lunar New Year (LNY) holiday, which before COVID-19 was known as the largest annual exodus of people.

“The prevention and control of COVID in China is still in a time of tension, but the light is in the future, and perseverance is victory,” the Chinese president said in LNY’s welcome message transmitted by CCTV.

“I am very concerned about rural areas and farmers. Medical facilities are relatively weak in rural areas, so prevention is difficult and the task is daunting,” Xi said, adding that the elderly are a top priority.
Mr. Xi had championed an aggressive strategy to prevent the spread of the novel coronavirus from lockdowns and other restrictions on movement, which China imposed for three years at high economic and psychological cost, before abruptly abandoning it in early December, shortly after widespread protests.

The virus has been unleashed among 1.4 billion people in the country and has disrupted factory production and consumption in the past two months, but some analysts say a deeper-than-expected shock could be followed by a faster-than-expected recovery.

Economists are scrutinizing the holiday season for a glimpse of a recovery in consumption in the world’s second-largest economy after fresh GDP data on Tuesday confirmed a sharp economic slowdown in China.

A prolonged recession could exacerbate the policy challenges facing Mr. Xi, who must calm the pessimistic younger generation that led the November protests against COVID-19 restrictions.

While some analysts expect the recovery to be slow and uneven, Chinese Vice Premier Liu He told the World Economic Forum in Switzerland on Tuesday that China is opening up to the world after three years of isolation.
National Immigration Administration officials said that, on average, half a million people have moved into or out of China each day since its borders reopened on January 8, state media reported. That number is expected to rise to 600,000 per day once the holiday officially begins on Saturday.

But with workers out of big cities like Shanghai, where officials say the virus peaked, many are heading to towns and villages where unvaccinated elderly people have not yet been exposed to COVID-19 and health care systems are less equipped.

As the spread of the coronavirus intensified, some were putting the virus out of their minds as they headed to the departure gates.
Travelers were passing through railway and subway stations in Beijing and Shanghai, many carrying large suitcases with wheels and boxes full of food and gifts.

“I used to be a little worried (about COVID-19),” said migrant worker Jiang Zhiguang, who was waiting in the crowd at Shanghai’s Hongqiao Railway Station.

“Now it doesn’t matter. Now it’s okay if you get infected. You’ll only be sick for two days,” Jiang, 30, told Reuters.
Others will return to grieve for their dead relatives. For some of those, that bereavement is mixed with anger at what they say was a lack of willingness to protect the vulnerable elderly before the sudden shift in policy.

In more isolated areas far from rapid urban outbreaks, the state’s medical workers this week are going door-to-door in some remote villages to vaccinate the elderly, with the official Xinhua news agency calling the effort “the last mile.” 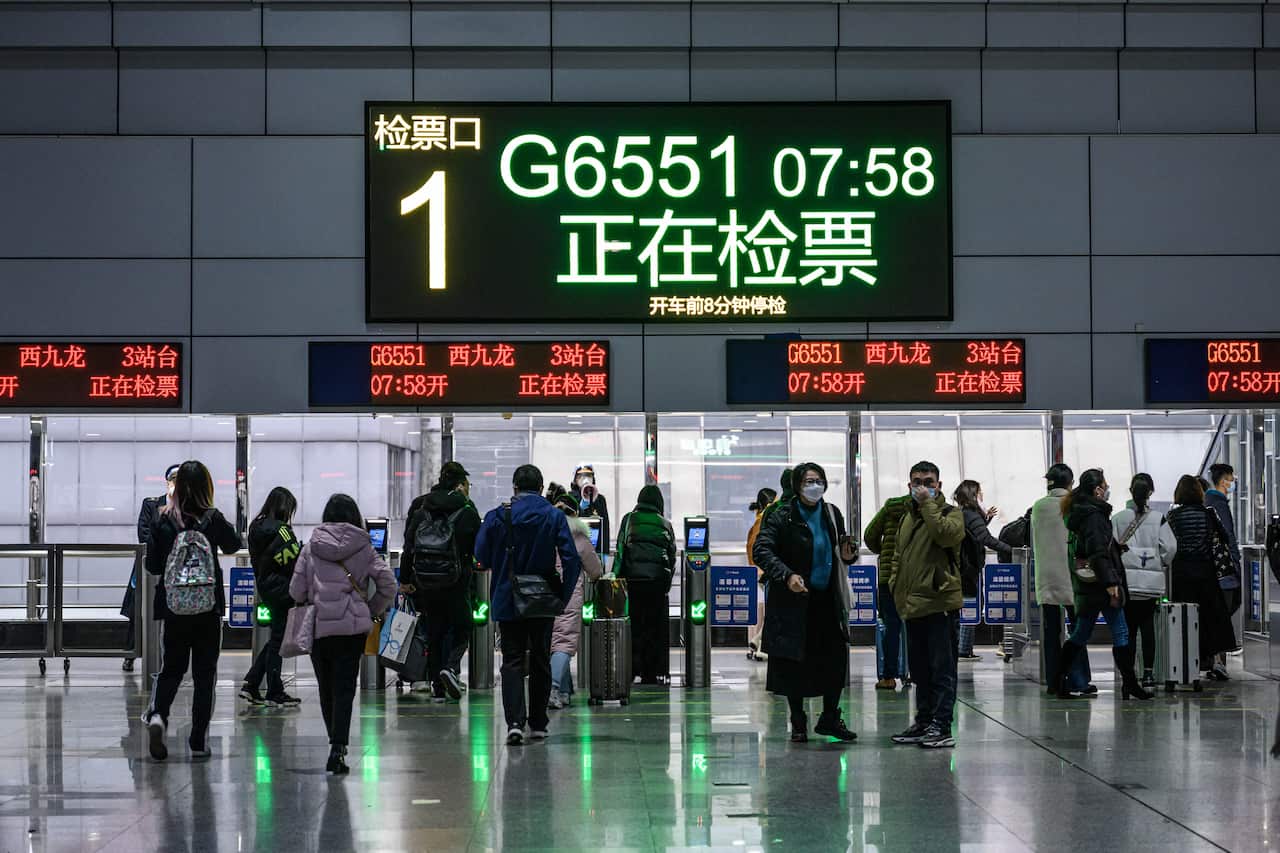 Hong Kong and mainland China have resumed high-speed train services from January 15 after a three-year suspension due to COVID-19. Source: GT / Anadolu Agency via Getty Images

Clinics in rural villages and towns have been equipped with oxygen, and medical vehicles have been deployed to places deemed vulnerable.

As authorities on Saturday confirmed a massive increase in deaths — announcing that nearly 60,000 people with COVID-19 had died in hospitals between December 8 and January 12 — state media said health officials were not yet ready to inform the World Health Organization (WHO). . The additional data you are looking for now.

The World Health Organization told Reuters in a statement on Tuesday that the U.N. agency specifically wanted information on the so-called excess mortality – the number of deaths above normal during a crisis.
The Global Times, reported by the official People’s Daily, quoted Chinese experts as saying that the Chinese Center for Disease Control and Prevention is already monitoring such data, but it will take time before it is released.

Reuters reported on Tuesday that doctors at both public and private hospitals are discouraged from attributing deaths to COVID.